How I got my first consulting client. In the summer of 2007, JobMob was only a few months old and had less than 200 subscribers. I was still learning how to bl

Is an Economics Major the Best Path for You? Monday, 17 February 2020
How to Stand Out as a Leader in Your Career Tuesday, 11 February 2020
7 Tips to Engage Employees in the Education Sector Tuesday, 28 January 2020
Font size: + –

How I got my first consulting client.

In the summer of 2007, JobMob was only a few months old and had less than 200 subscribers. I was still learning how to blog, but I could already see potential. With the idea of having a legal framework to sell services or products through JobMob and any other blogs I might create, I started my company, Share Select Media.

At the time, I was also in a partnership with a Jerusalem-based entrepreneur to create a tech startup that had absolutely nothing to do with job search.

With our idea in hand, my partner and I started looking for funding from venture capital investors (venture capitalists or VCs, for short) but otherwise we kept in ‘stealth-mode’, not mentioning our project to anyone online or offline.

That December, I decided to head to Paris, France to attend LeWeb3 ’07, one of the largest annual tech conferences taking place in Europe at the time, attracting people from all over the world including many Internet celebrities and venture capitalists.

I went to the event with 2 separate missions:

Publicly, I was the founder of Share Select Media and looking to meet other bloggers and particularly, companies who needed blogging services. Privately, I wanted to make contacts with as many relevant VCs as possible for my partnership.

As the event approached, I was prepared with business cards and a bright orange rugby jersey with a white Share Select Media logo on the breast and a much larger one on the back. I even had a matching kipa (yarmulke) to complete the standout attire that was guaranteed to not be worn by anyone else, anywhere.

Yet even with all that branding gear, I was sure that I could kick it up a notch. In the days leading up to the event, I wanted to come up with an idea that would really open people’s eyes and be memorable… but nothing came to me.

Finally, the night before the event opening, the idea came.

After an official kickoff by event founder Loïc Le Meur, the first item on the conference schedule was an interview of Kevin Rose, founder of Digg.com, one of the most popular social media networks in the world back then.

Digg was one of the first websites that allowed users to submit links to their favorite articles online, encouraging others to Like those articles enough so that they would eventually appear on the Digg homepage, generating waves of traffic to those sites.

However, it wasn’t called ‘Liking’ back then, it was called ‘Digging’ and to digg an article meant to click a large yellow “Digg button” beside the related article. That button said how many Diggs (=Likes) that article had already received, and the number increased by one with your click.

So what was my idea?

I’ve always loved crossovers from the digital world to the real world, like the space invaders art that appears on buildings around the world. Well, what if I did a crossover of the Digg button while Kevin Rose was on stage?

Using cardboard, yellow paper and markers, I could make a Digg button that looked exactly like the ones on Digg.com. Then, I could stand off to the side of the stage and hold it up during the Kevin Rose interview, updating the Digg count from time to time, as if people were clicking somewhere and I was taking their votes into account.

When the idea dawned on me, I got nervous right away. I knew it was a good idea but what if the event organizers wouldn’t let me do it? Or what if they stopped me in the middle? Or what if it just looked bad?

Instead of making a great impression on hundreds of attendees, I’d be making a horrible impression on them and during the first minutes of the conference to boot. For the next 2 days, everyone would recognize me as that screwup opening act.

But that’s not what happened.

After debating whether I could really go through with it, I figured- what the heck? At worst, it would make for a great story to blog about in 6 years… yeah, right.

I ran to a local office supplies store, bought what I needed and worked until 3 am when I finally had a Digg button worth bringing to the conference 5 hours later.

Waiting in line to get my conference name tag and other handouts, a number of people started to notice that I was carrying something different than everyone else; not a laptop or briefcase.

Some people recognized my work for what it was and smiled, while one man was particularly curious. After explaining to him my plan, he just said “this I gotta see” and followed me into the main auditorium, down to the first rows.

It was a few minutes before the conference would begin, so I quickly got ready with the Digg Button and a thick marker for updating the numbers. As I was doing so, someone called out “hey, what is that?”

3 rows behind me was sitting Robert Scoble, one of most famous tech celebrities of them all – to this day – notorious for taking lots of pictures wherever he went.

I chatted with him for a few minutes, telling him the idea and he loved it, taking a picture of the Digg Button and me with it (I have no idea if that picture made its way online, but I’d love to find out).

Between him and the guy who followed me in, I was starting to feel like the idea was really going to work.

Then the conference began. Loïc Le Meur welcomed us over a few minutes, and then left the stage for Kevin Rose’s interview with tech journalist Sara Lacy.

That was my cue. I waited 10 seconds and then got up from my seat, taking the oversize Button and marker with me, walking over to the left side of the stage to place myself in the same location where the digg buttons always appeared online- left of the content.

The stage was a few feet off the ground, so I could easily stand in front of it without blocking what was happening on stage.

I was certain that if I was too distracting from the speakers, security would pull me away. But if I was too far off to the side, no one would see me.

After choosing my spot, I stood there and held the Digg button up in front of my chest and face.

The auditorium was dark with the lights focused on the stage, but the Digg button’s bright yellow paper could still be seen easily. And even though it was blocking my view – it’s easier to do bold things when you can’t see how people react – I could immediately hear a sudden rush of picture-taking and camera-flashing, so I knew that people were noticing me.

The thing is, security also noticed me.

Within a few minutes, a security staff member pulled me to the side and asked me what I was doing. I told him that I was having some fun with Kevin Rose. “You’re not being paid to do this?” he asked. “No,” I answered. He had a quick conversation with someone via his headset microphone and then turned around. “Ok, you can go back, just be careful not to get in the way.”

For the next 20 minutes or so, back in my spot, I would alternate between holding up the Button and flipping it over to update the number appearing on its front side.

The camera crew recording the event loved it too, zooming in and using me for cool angles of the stage, like the shot taken here: Throughout the first day of the conference, about a dozen people came over to ask me what the story was with the Button.

Two people even thought that I was part of the event production, as if the audience had been able to vote and I was simply updating the vote count as relayed to me by my bosses the event organizers.

Later, that night at the official LeWeb party, Loïc Le Meur was personally welcoming people into the door at the club. When I arrived still wearing my bright orange rugby jersey and kipa, he immediately recognized me and smiled. “What you did this morning? That was awesome. Nice.” So he was the other person on the headset with the security guy who pulled me over earlier… I thanked him for that, and for the event overall.

And the guy who “had to see this”?

He stayed close over the two days of the conference and a few months later, became my first consulting client.

Question of the article

If this wasn’t the best personal branding story you’ve heard, what was? Tell us in the comments.

No comments made yet. Be the first to submit a comment
Top Information Technology Jobs For 2013
Work-Life Balance Is Overrated: 3 Tips to Stop Fee...

Is an Economics Major the Best Path for You? Monday, 17 February 2020
How to Stand Out as a Leader in Your Career Tuesday, 11 February 2020
7 Tips to Engage Employees in the Education Sector Tuesday, 28 January 2020 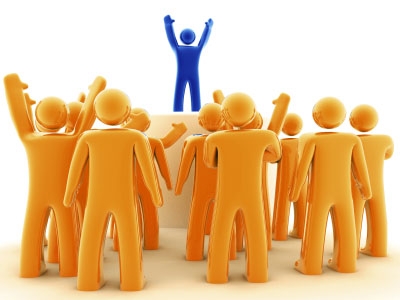 7 Great Ways To Tailor Your Resume For A Leadership Role
Are you a prime candidate for a mid- to senior-level leadership role? Before you apply, make sure...
13 January 2015